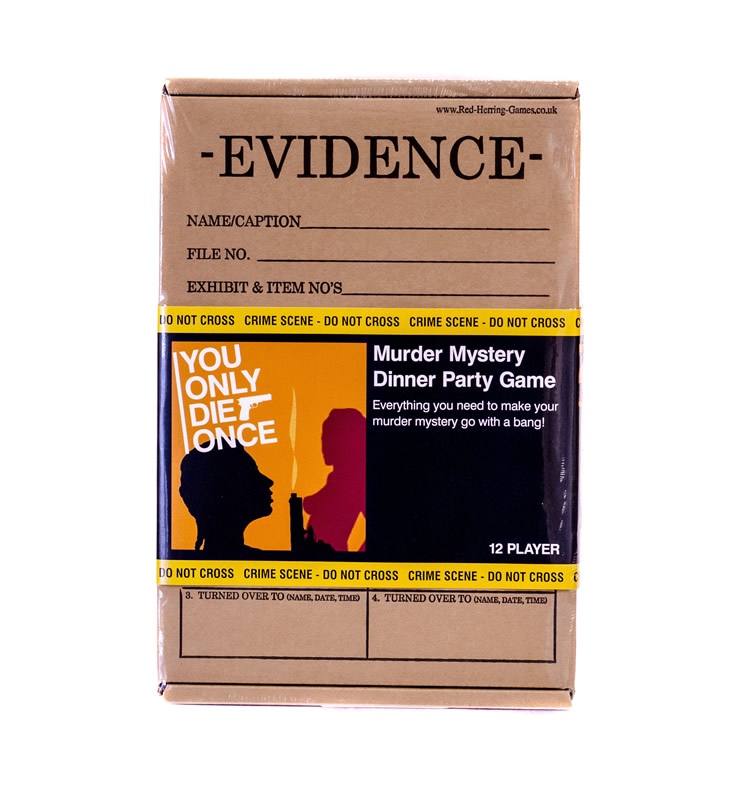 0 in your basket
View Basket Checkout

YOU ONLY DIE ONCE - 12 player version

Making the most of your theme ideas

After many years of exemplary service M (the head of MI 6) is retiring. And what a bash it is! Friends, colleagues, and even criminal masterminds have put in an appearance. In fact, it would be safe to say that everyone who is anyone is there to see he gets a good send off.

Well, everyone that is except Roger Damsels, 006 ¾, MI 6's top secret agent. When a search is undertaken for the celebrated spy, he is discovered dead in his room, leaving M with one last crime to solve before he can retire.

Kitty With-Claws - A pussy cat you wouldn't want to mess with.
This well dressed beauty is more than equipped to kill any would be suitor.

Scaryminger - The man with the golden bum.
Living on a desert island, Scaryminger is always able to perfect his all over tan, right to his third nipple.

Cuttlefishy - More than a sweet distraction.
With floaty dresses and serene expression you could be mistaken into thinking Cuttlefishy was an easy catch.

Ernst FuzzyFelt - The man with the white cat.
Despite his keen love of white felines, Ernst's dark suit never even carries a hair.

Dr Yes - Or is it No? Perhaps Undecided would be a better title.
On one of his rare appearances away from his island, Dr Yes is simply a man in a suit - but with a dastardly plan.

Xenia Onabottom - A woman who knows how to take care of herself.
With fast cars, glitzy dresses and the ability to kill with her thighs, Xenia is a nice girl when you get to know her - honest!

Felix Heavier - An ally within the CIA.
When you want to send for the heavy mob, Felix is your man. He has a full six pack, as well as enough ammunition to sink a battleship.

Quadruple X - The Russian spy.
In snow gear, or flimsy Egyptian dresses, Quadruple X is still a force to be reckoned with.

Gnaws - A solid tower of a henchman
Gnaws did have a nice smile, but unfortunately, frequent visits to the dentist have left him with more fillings than teeth.

Dr. Easter Jones - A scientific beauty.
In vest top and shorts, or greasy overalls, there's no denying Jones has a perfect figure, even if it is only 3.1415926.

This game will be dispatched direct to you by the lovely Red Herring Games. We'll pop you an email as soon as it's on the way!

Recommend this to a friend  +